Hamamatsu, Japan, April 27, 2012 – Roland DG employees, affiliates, customers and friends from all over the world gathered last week at the company's headquarters in Hamamatsu, Japan to celebrate three decades of Roland innovation and creativity.

The week-long 30th anniversary event included a day of fun and festivities at the company's headquarters, followed by tours of Tokyo and Kyoto. Throughout the event, all eyes were on the 16 attending regional finalists in the company's recent Roland Creative Awards international contest, whose work was recognized as the world's most creative and innovative from 1,193 contest entries.

The highlight of the celebration came Tuesday evening when Roland DG President Masahiro Tomioka awarded the contest's grand prize to the Lu Xun Academy of Fine Arts in North Eastern China. Accepting the award were Du Haibin and Jiao Hongwei, industrial design professors at the university. As the grand prize, Haibin and Hongwei have selected a Roland EGX-360 gift engraver for the university. 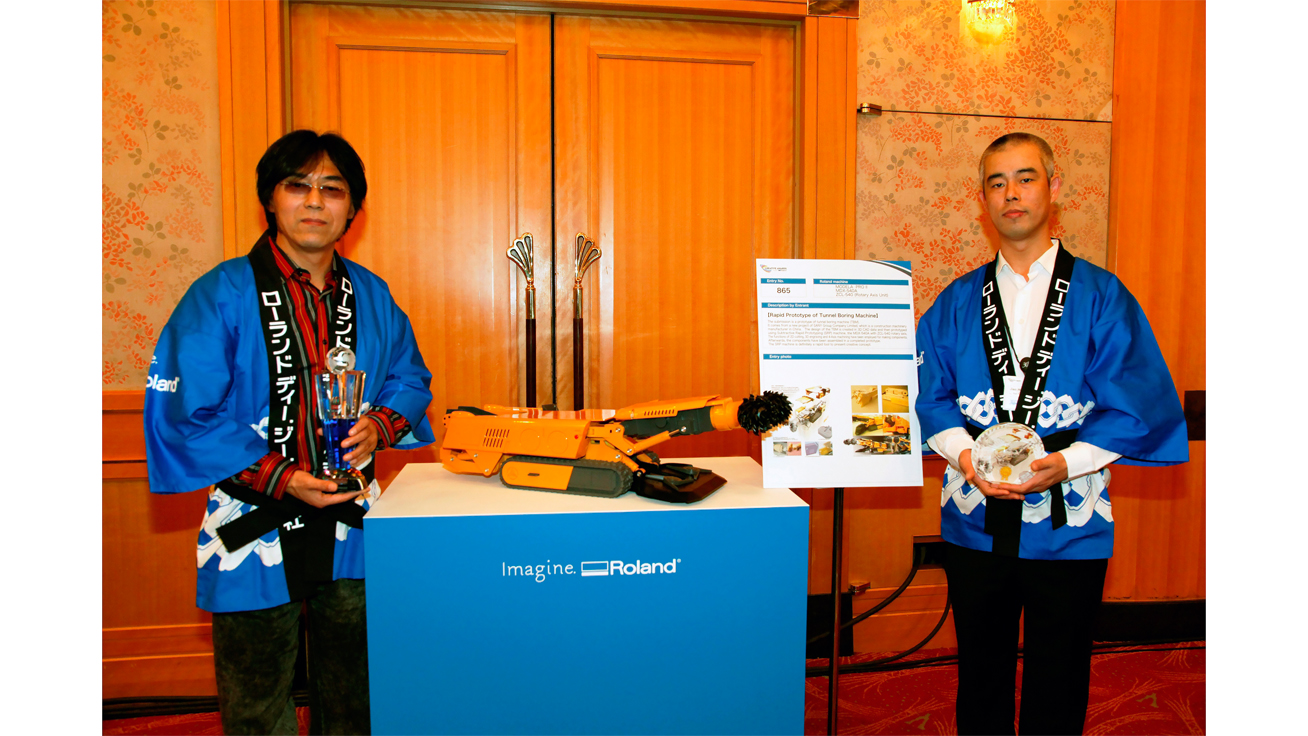 "Our entry, a scale model tunneling machine, was part of a transportation-themed project that teaches students how to transform a 2D design into a 3D prototype," Haibin said. "Winning the Roland award is important to our school as it provides visibility to our efforts and assists us in attaining funding for future projects."

The elaborate winning prototype was produced on a Roland MDX-540 milling machine and is comprised of several sections that were each milled separately from a variety of materials. Along its surface are many intricate contours, textures and details made possible by the precision of Roland subtractive rapid prototyping technology.

The Roland Creative Awards invited Roland businesses from more than 120 countries worldwide to submit their best work as produced on the company's wide-format inkjet printers, vinyl cutters, engravers, 3D milling machines and other production tools. Entries spanned industries and applications, and included everything from signage, banners and vehicle wraps to personalized accessories, jewelry designs, decorated apparel and even tattoo art. The entire gallery of entries can be viewed online at www.rolandcreativeawards.com.

More than 75 prizes were awarded throughout the contest, which ran from Sept. 2011 to Jan. 2012. In addition to being a showcase of creativity, the contest illustrated the breadth of Roland's technological achievements, developed and advanced over the past 30 years.

"It is a privilege to be part of such a dynamic, accomplished organization and to be here among friends and colleagues for this very special event," Tomioka said. "When I look back at the company's origins, it's hard to imagine how far we have come and how many lives we have touched. The tremendous work of our customers on display through the Roland Creative Awards really says it all. When you empower creative professionals with innovative tools and technologies, the possibilities are endless. To that end, we will continue to pursue excellence, and we look forward to inspiring our customers' creativity in the future."