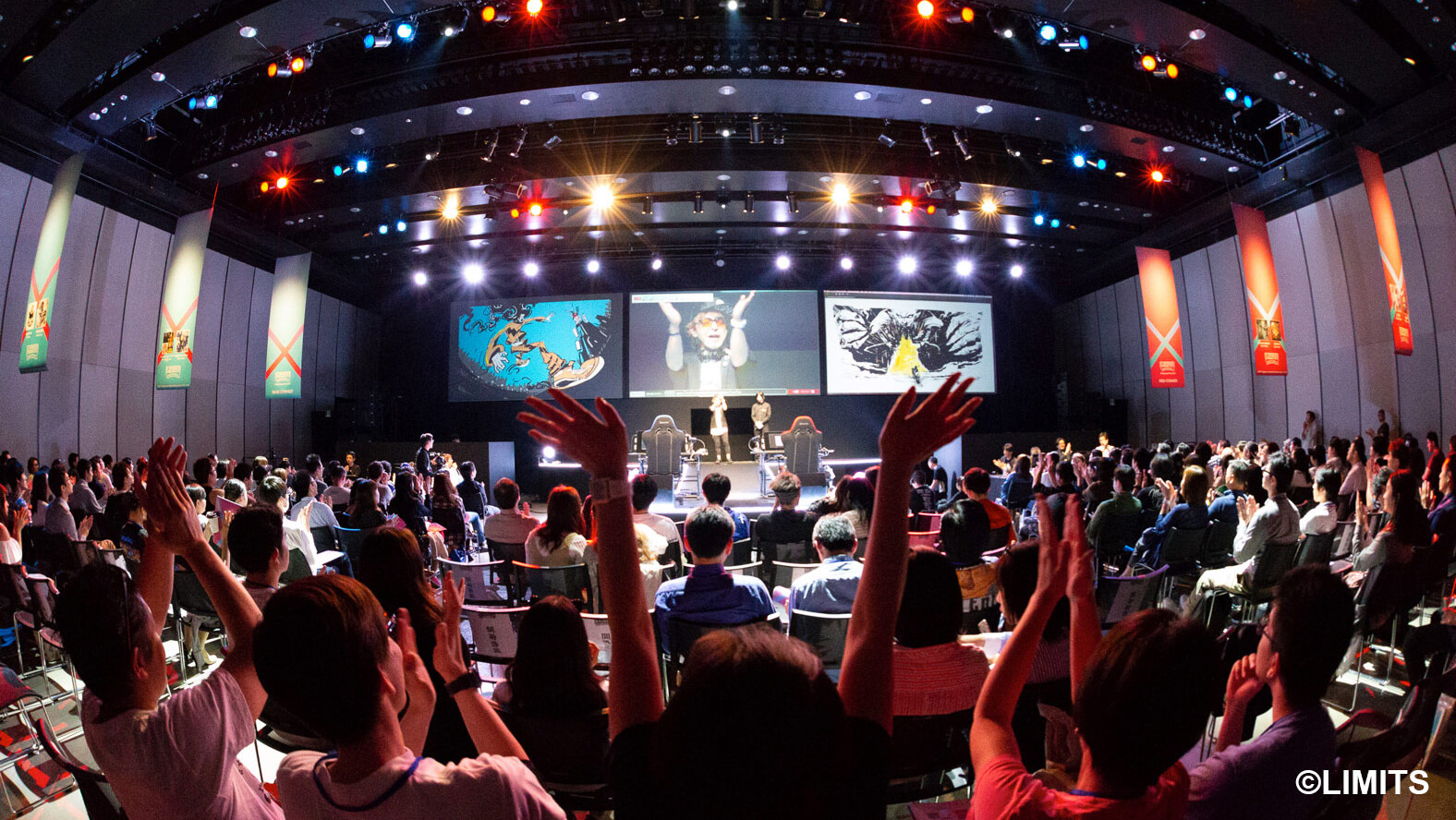 The LIMITS Digital Art Battle World Grand Prix 2018 was held at Shibuya Hikarie Hall (Hall-A) in Tokyo over the May 12-13 weekend. Roland DG sponsored the event to support the creative activities of artists utilizing digital technology, and also assisted with the production of official merchandise. 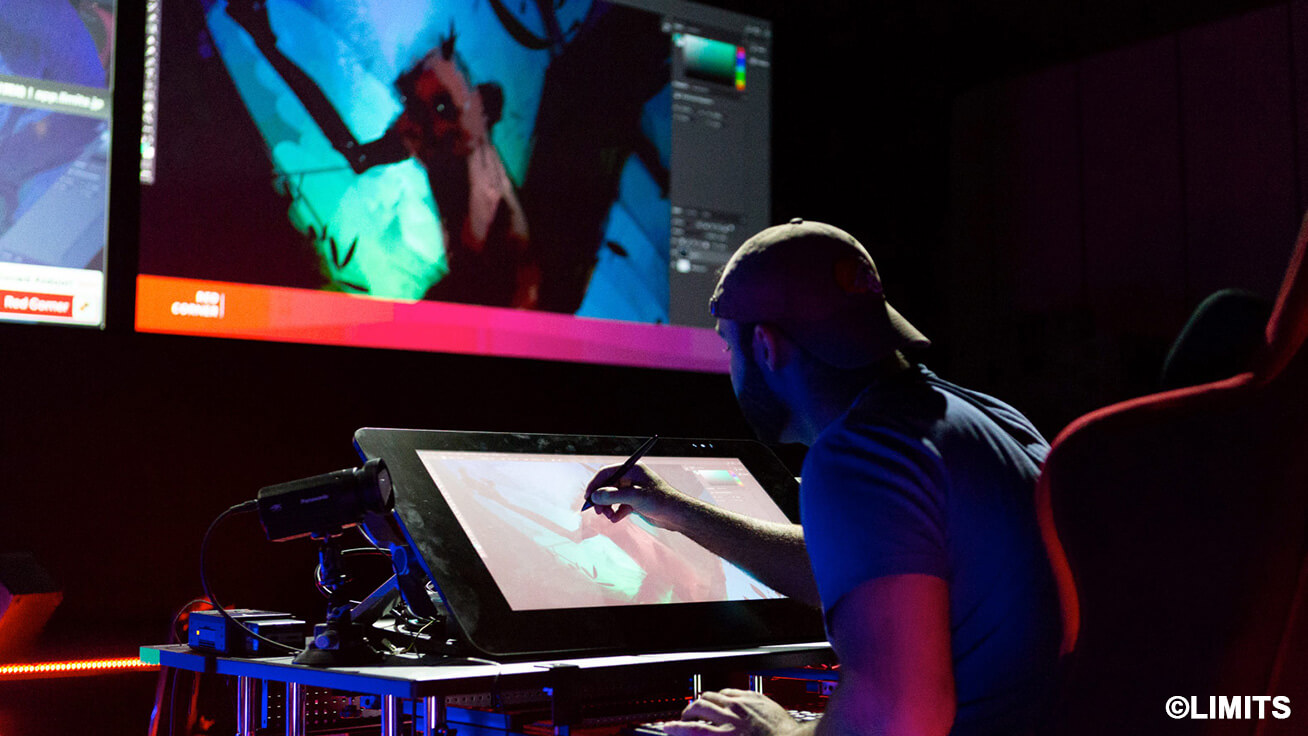 Scene from the World Grand Prix.


LIMITS is an art contest with a tournament format where artists compete against one another designing and creating digital works of art. Votes submitted by the judges and the online audience are then tallied up to determine the winner with the highest overall number of votes. The event is drawing attention as a new form of entertainment created in Japan with the aim of making art more enjoyable to a broader range of people and to expand the scope of artists’ activities. More than just the finished work of art, the best feature of the event is actually being able to witness digital art being created and then voting on the best piece to determine the winner. Before each match, a roulette wheel is used to randomly select a theme for the artwork, and then the artists are limited to just 20 minutes to create their drawings. In addition to technique, the event tests the artists’ ideas as well as the speed and the manner in which they convey their visual journey – how well they convert their drawing process into a storyline.

Check out the rules of the LIMITS event here (Japanese):

This year marked the second time the world grand prix was held, with 16 international contestants selected from some 400 artists who participated in qualifying rounds in Japan, Taiwan, Hong Kong, Korea, and the US. Contestants competed against each other in a tournament-style event, with the final winner being crowned world champion and collecting a share of the 10 million yen in total prize money. Around 1,000 visitors attended the two-day event with another 17,000 tuning in to the live streaming over the internet.

The artworks created by the artists were displayed in real time on large screens in the venue, with the cheering and shouts of encouragement from the audience resembling a live musical performance or sporting event. The audience watching the matches, as well as fans tuning in to the live broadcast, were able to send messages of support that were displayed on the screens, allowing the artists and fans to share a truly unique experience together. During the contest, the artists exhibited their characteristic artistic styles as they created their works of art by merging their own sense of creativity with digital technology. Some creations were based on photos taken at the venue with the audience; others conveyed a story by starting with a particular theme and then drawing more ideas over the top; others also drew the theme that was required for their match at the very end as the clock was counting down. After a grueling two days, first-timer Ahmed Aldoori from the US was crowned champion. 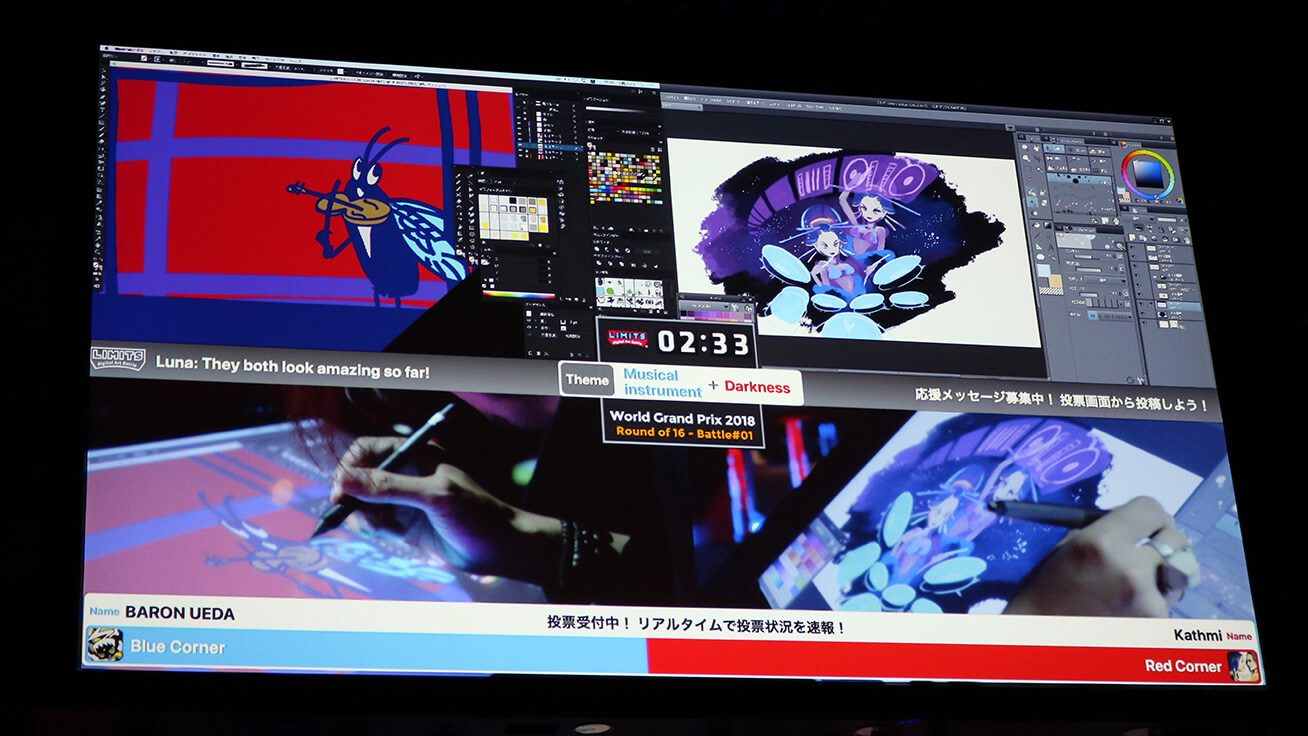 Matches were held with themes like Musical Instrument and Darkness, and Life and Best Friends. 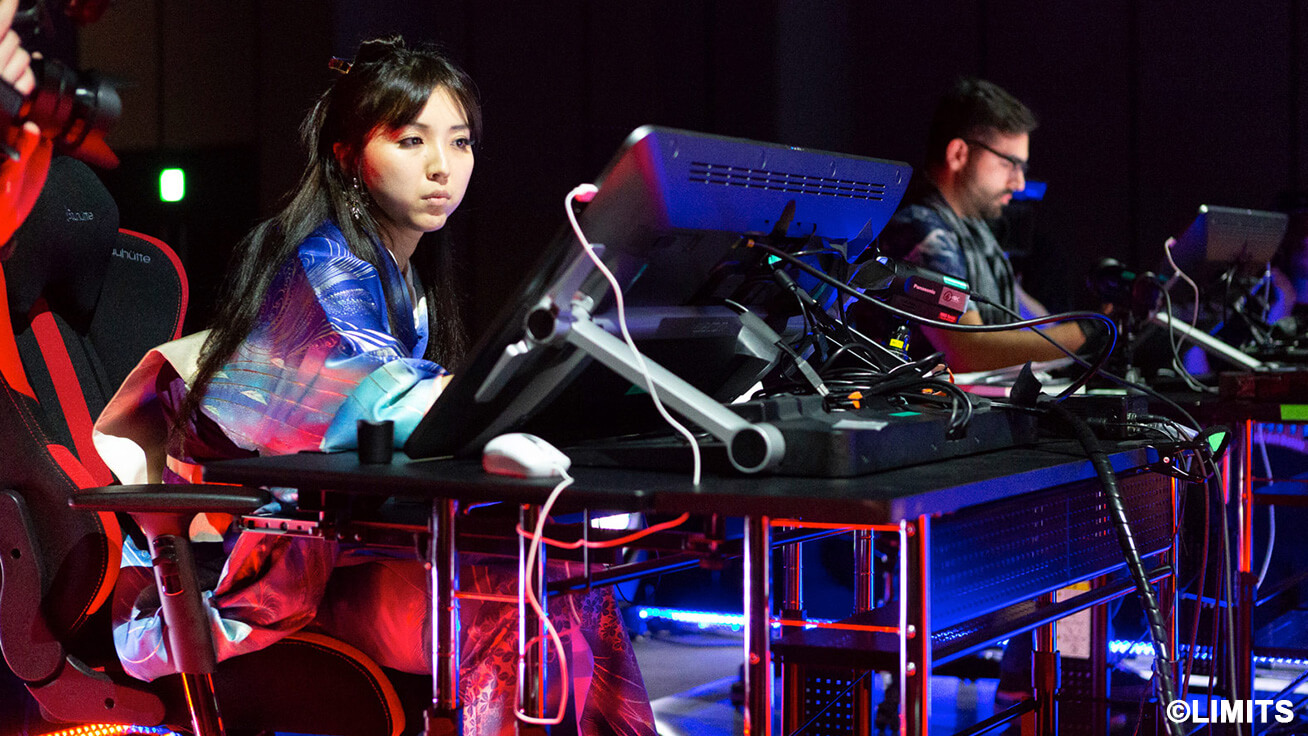 Artists pushed the limits of their creative skills. 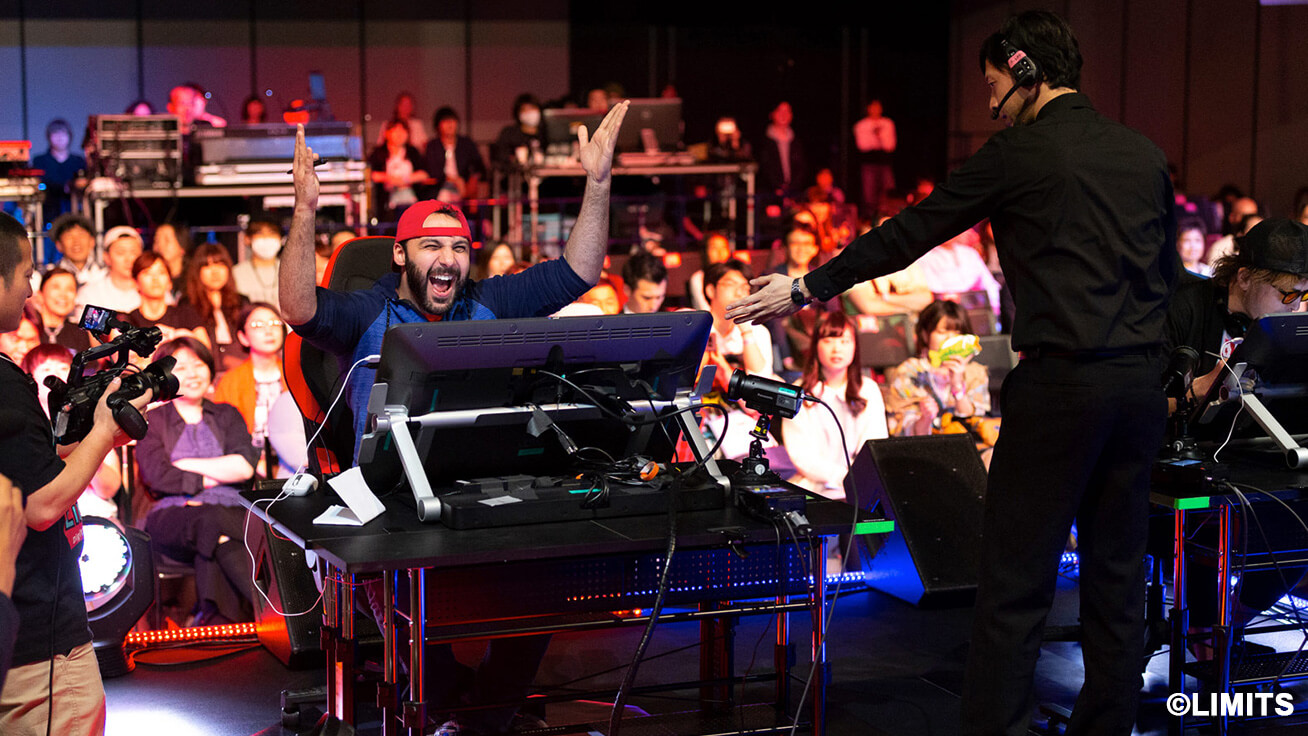 Ahmed Aldoori (US) was crowned champion. 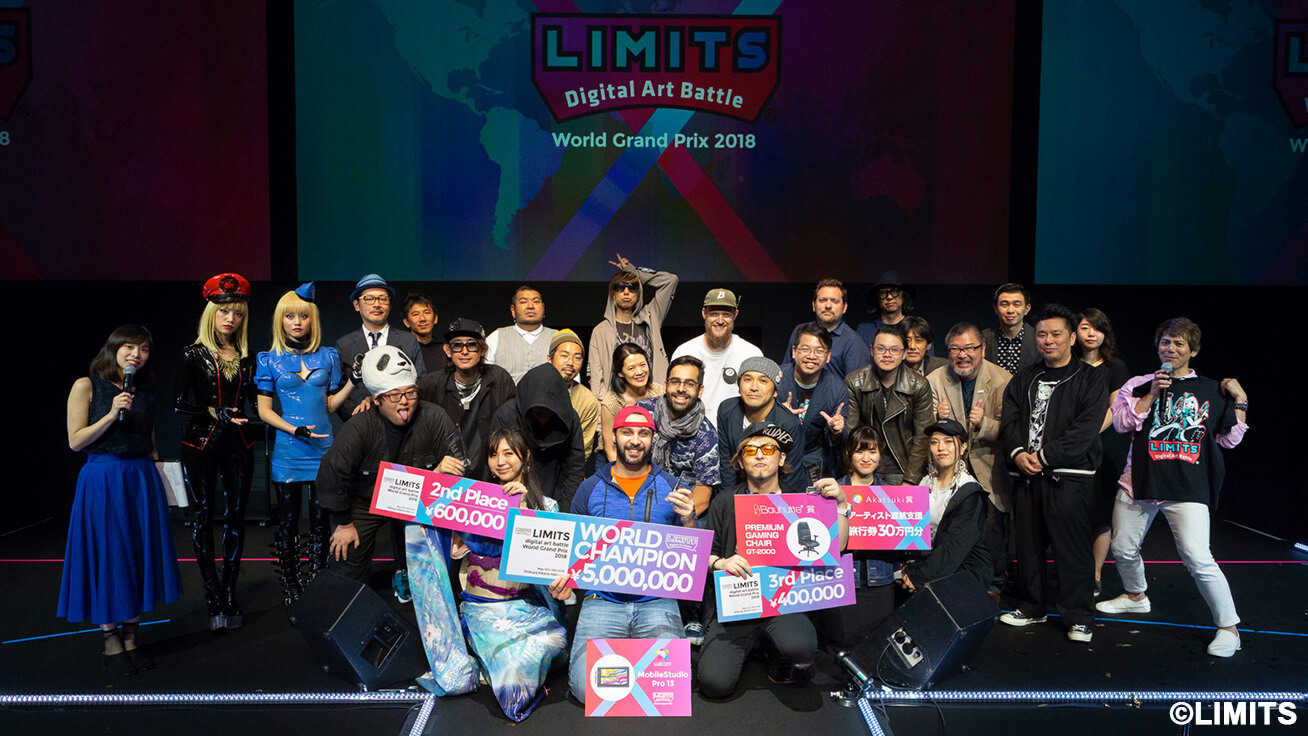 All the competing artists.

Companies sponsoring the event ran booths at the venue, with some including digital creative stations to allow visitors to experience a similar drawing process to the artists. Visitors to the Roland DG booth could create one-of-a-kind key chains by selecting designs made by their favorite competing artist and entering their name, which were then printed out using Roland DG’s LEF-300 UV printer and sold at the booth. Visitors were fascinated by watching their designs being printed right in front of their eyes. They commented on how the event would be a memorable experience for them, and that they were excited to go home with a one-of-a-kind item from their favorite artist. The booth also featured canvas prints produced using the UV printer. 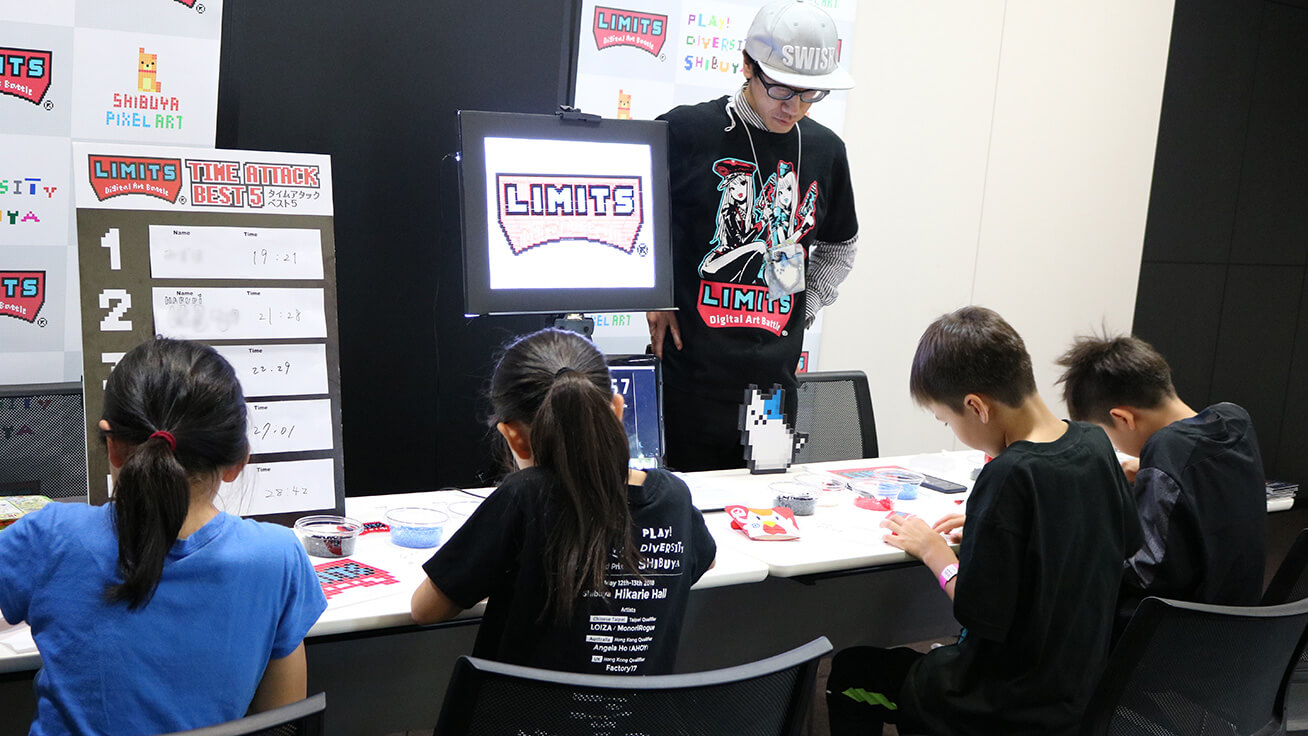 One of the creative booths at the venue. 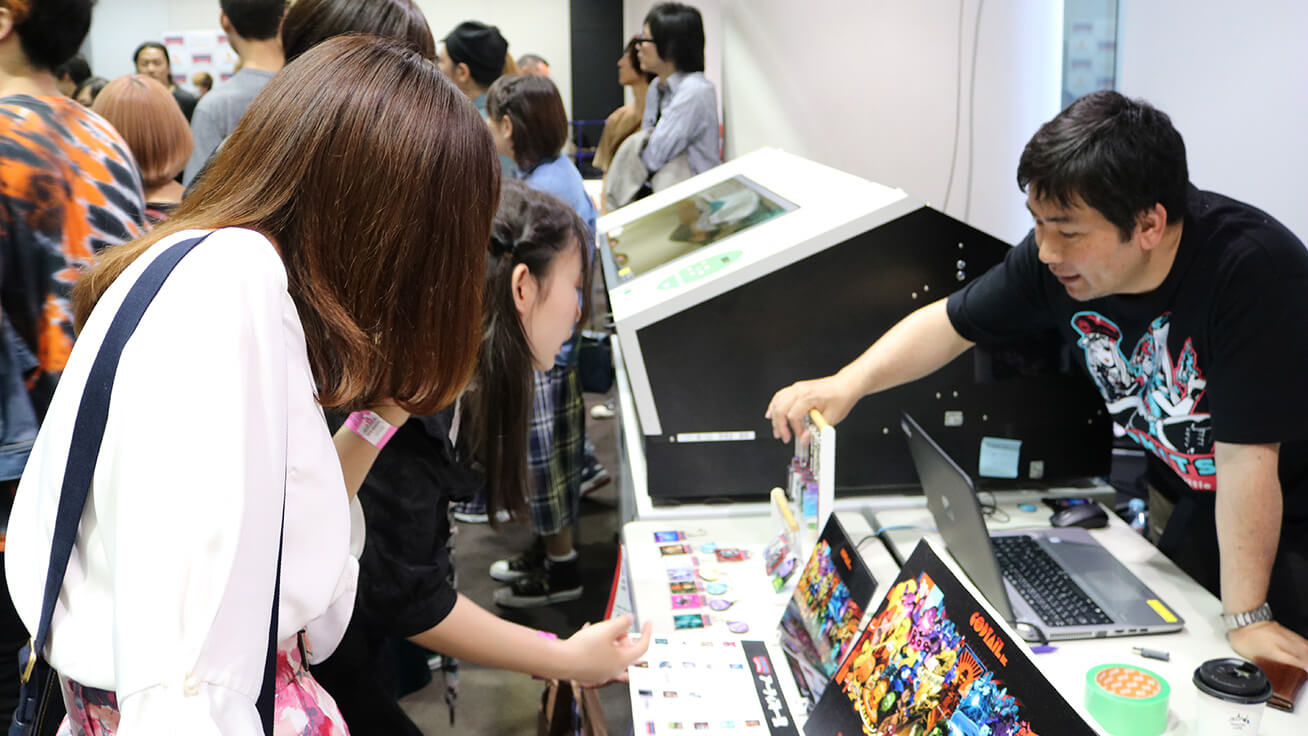 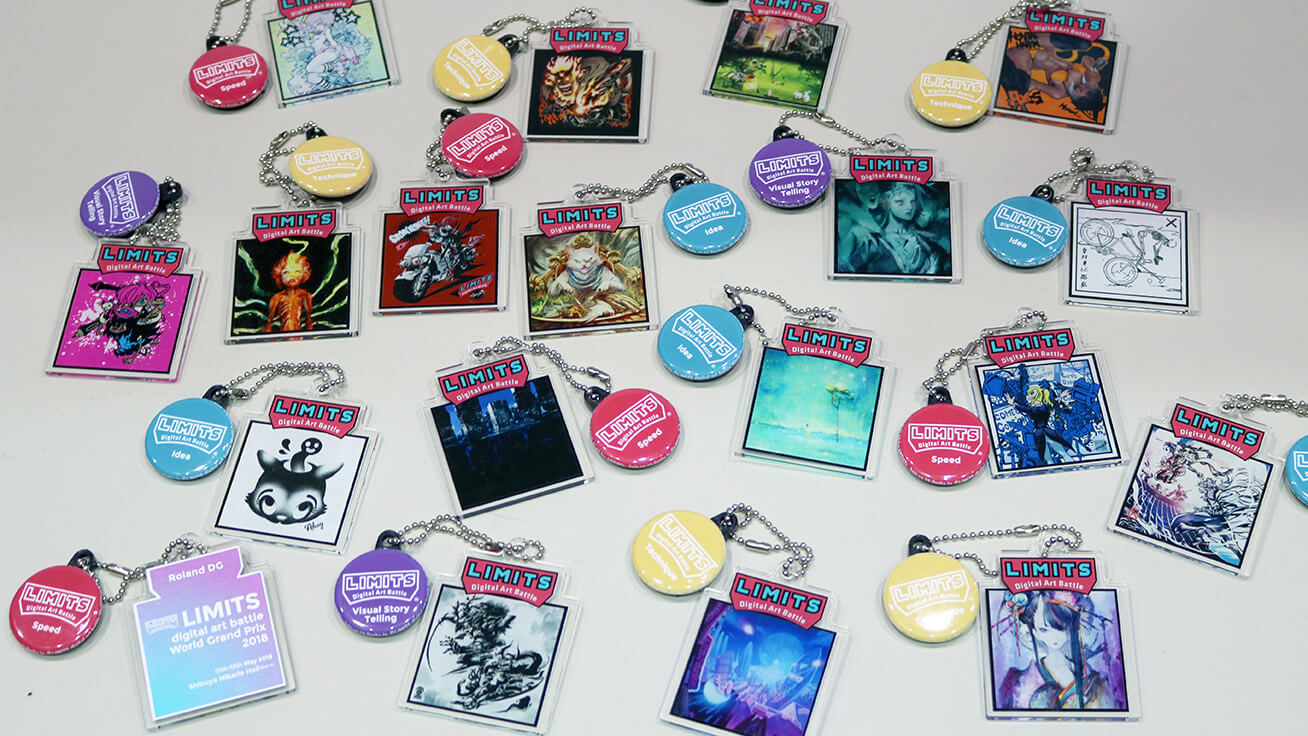 One-of-a-kind key chains made by printing out artists’ designs. 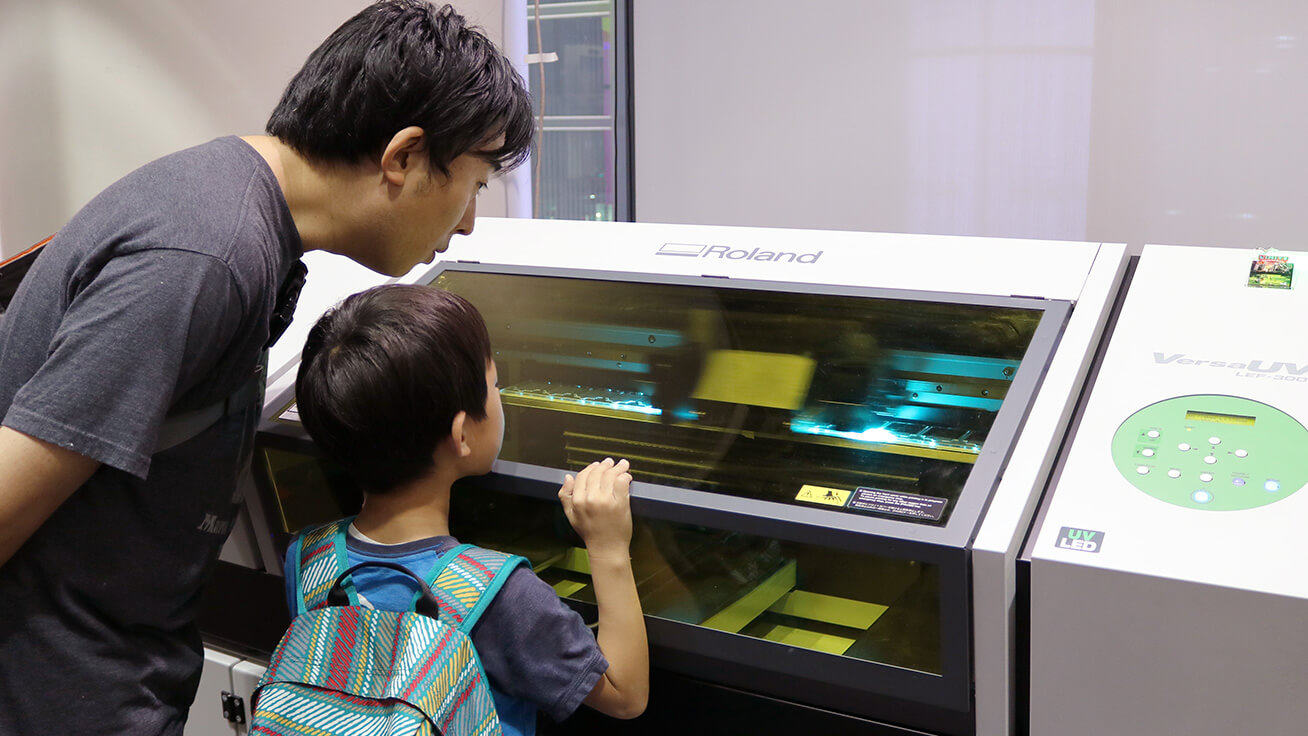 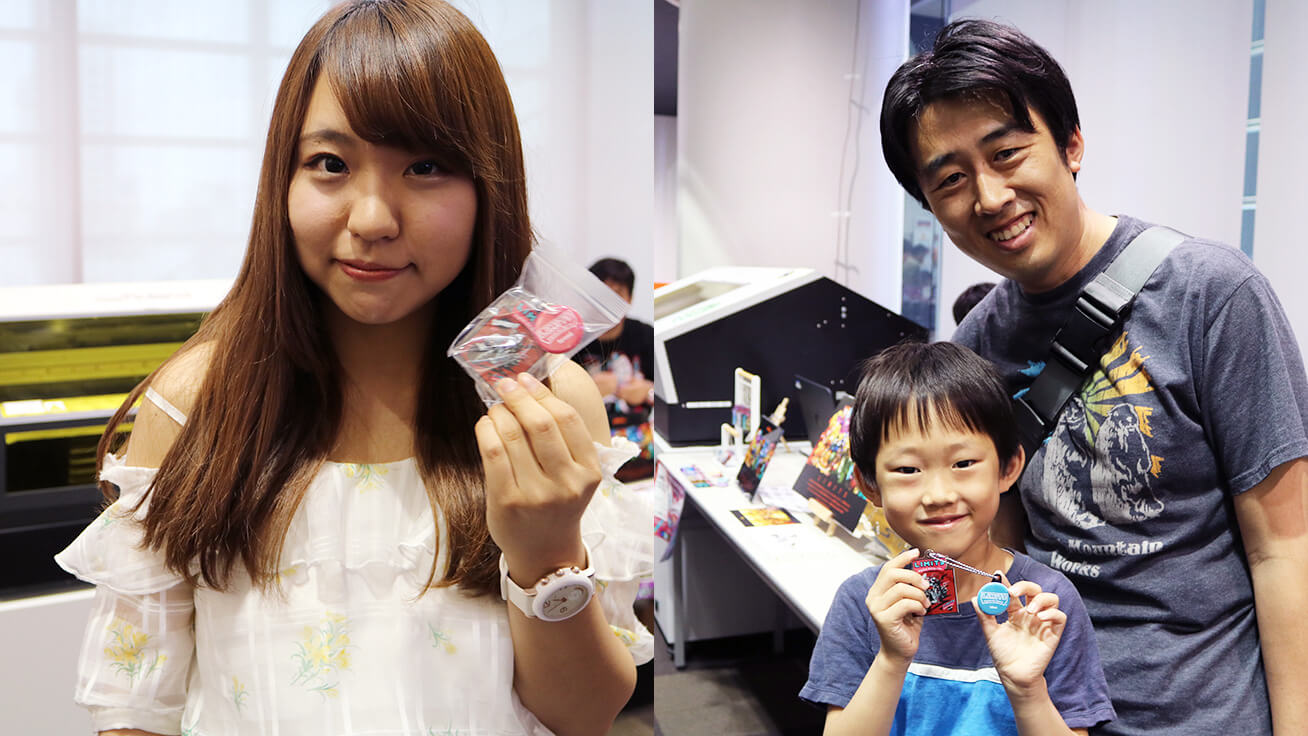 
The artists even dropped by the Roland DG booth between matches to relax. Their comments included, "It's fun to see my own designs included on items. I'm sure my fans want one, but I do too!" "UV printers are great because they can be used to easily make these one-of-a-kind items, as well as exquisite works of art." 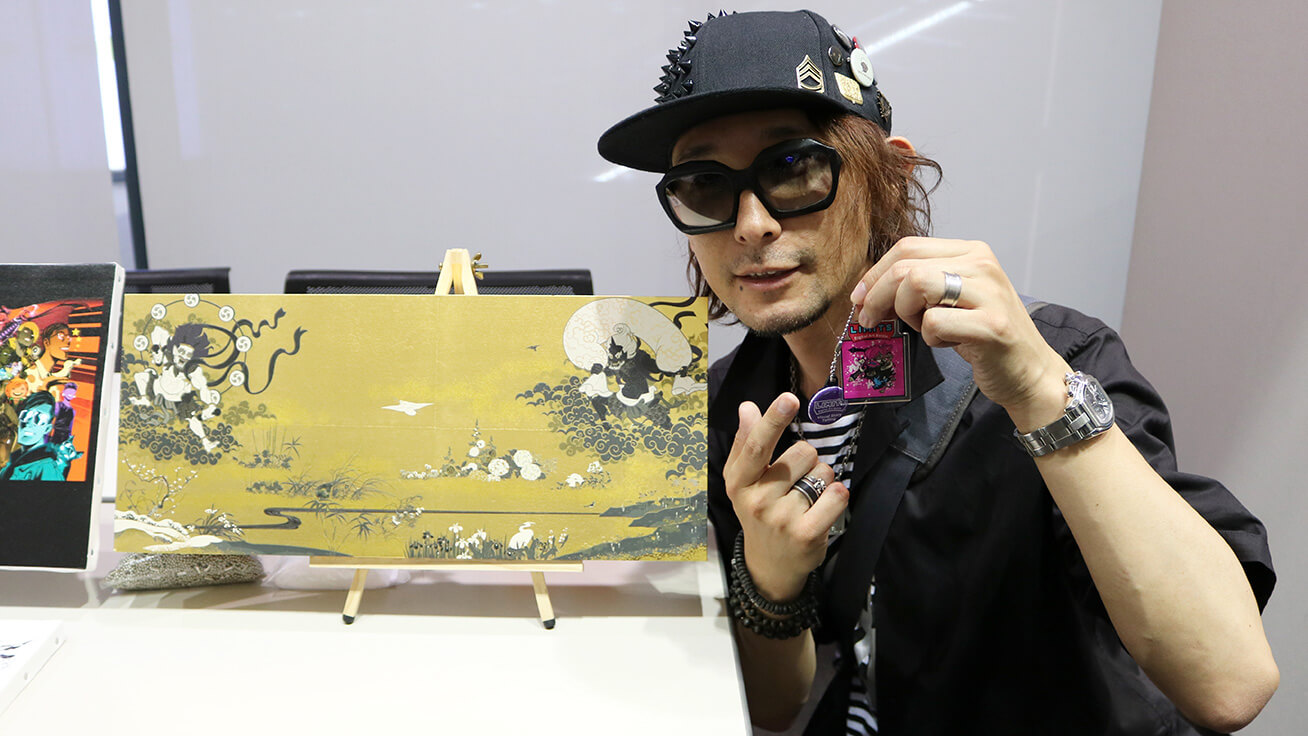 Baron Ueda (Japan) holding a one-of-a-kind creation he designed and standing in front of artwork he produced using a Roland DG UV printer. 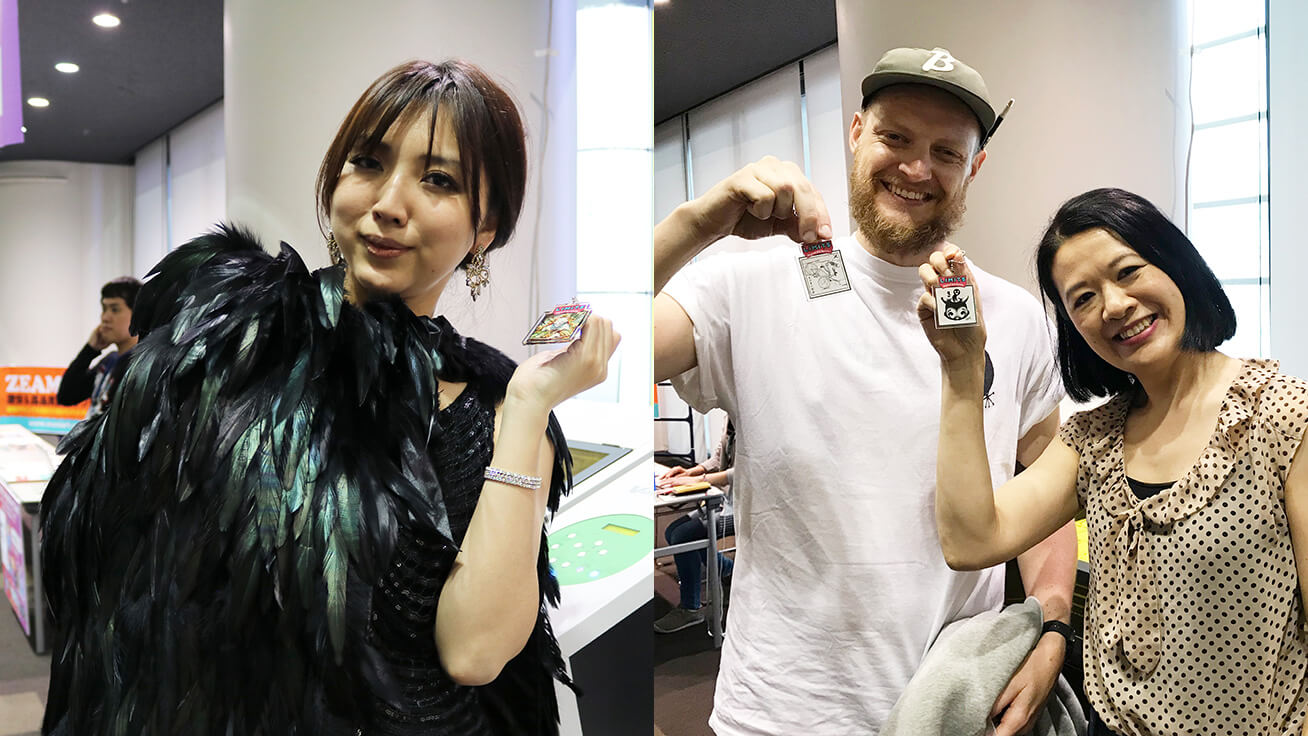 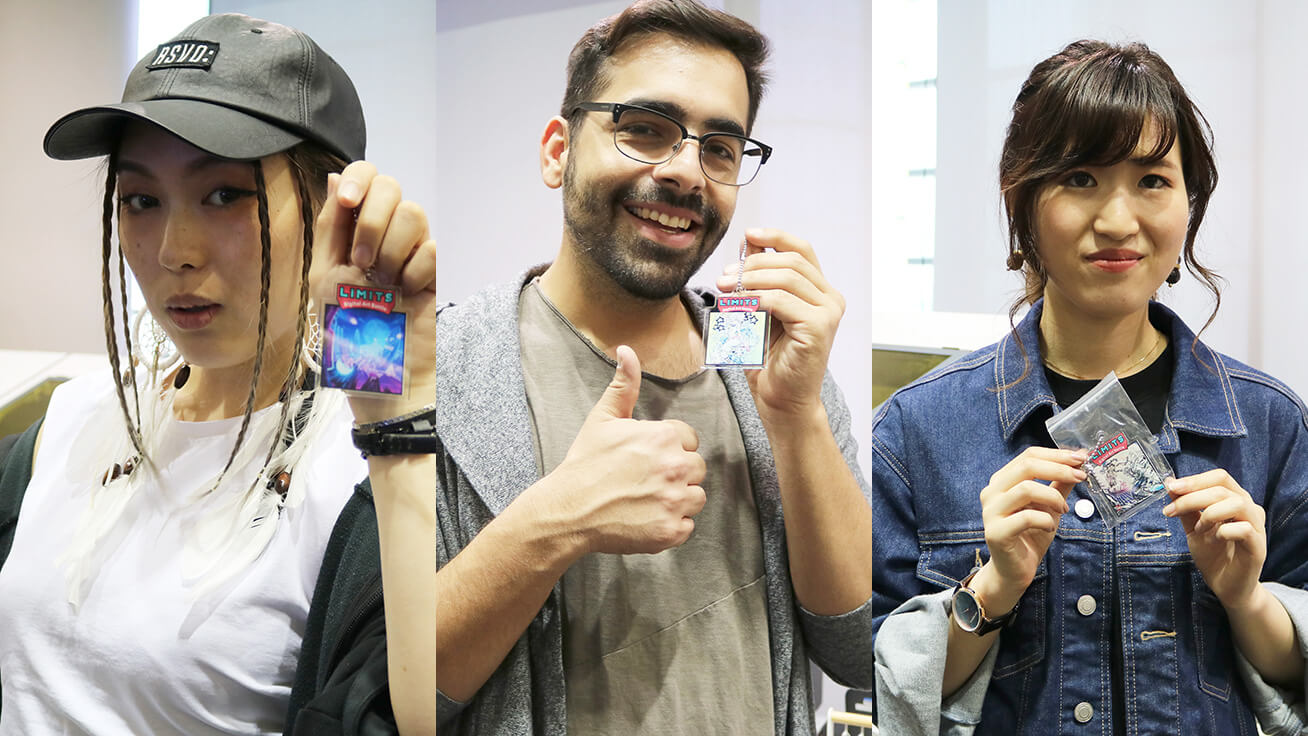 
This great event was an exciting opportunity for visitors to gain an insight into digital art by watching artists putting their highest levels of creative skills to work. We hope to see people enjoying this type of event more in Japan and around the world. Thank you to all the visitors who came to our booth, and the artists who assisted with the event! 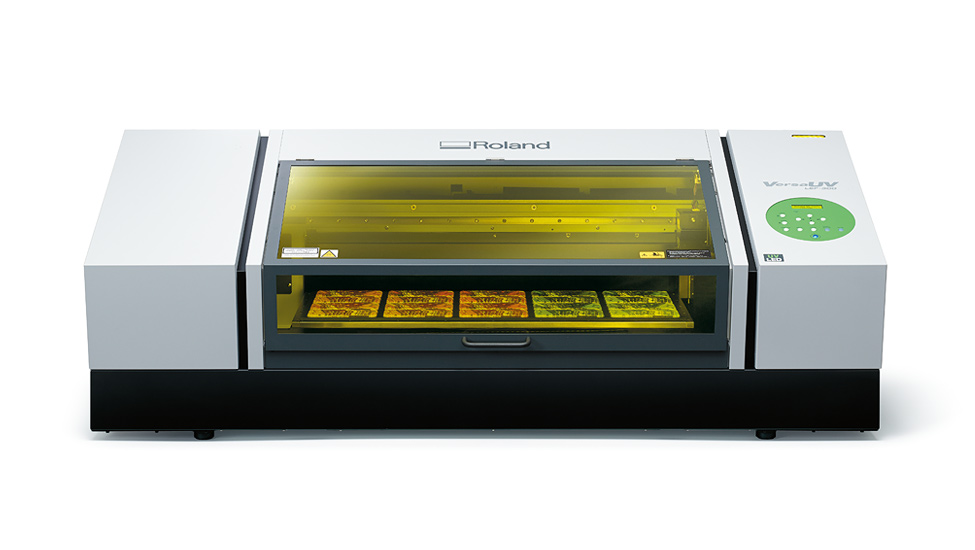